Back on July 25, 2010 we wrote about a pilot bioswale project that, then DECA executive member, Mary-Margaret McMahon was spearheading with another DECA darling, Lillian Sammon.

Can you believe it?  It actually happened!  Mary-Margaret and Lillian pitched a few ideas to the City. The City chose the one they thought was most viable, installed it and footed the bill. 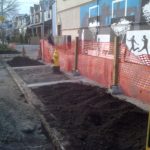 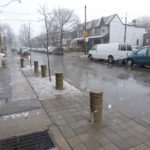 A bioswale is “a landscape element designed to remove silt and pollution from surface runoff water. It is filled vegetation, compost and/or stones. The water’s flow path, along with wide and shallow ditch, is designed to maximize the time water spends in the swale, helping trap pollutants and silt.”

Lead In The Water

Speaking of pollutants, and because we always have new people joining this community blog, I like to remind people about the issue of lead in the water. Old homes sometimes have lead pipes in the house or lead pipes from the street to your home. If you’ve never had your water tested (especially if you are pregnant, nursing or have young children) you may want to pick up a lead testing kit at the East York Civic Centre.  In the meantime, a few tips from Toronto Public Health  if you are concerned about lead in your water:

lead in water
0 comments to “Then and Now – Beautiful Bioswales”