Well, it seems our little introductory sketches of new board members were popular… at least with our veteran board members, who pleaded to be interviewed too. Okay, that might be a small exaggeration. But, they liked the bios and they wanted them to continue…

The good thing about that: DECA’s veteran board members are just as interesting and talented as our new board members.

Take, for instance, Steve Wickens. You might know him as the Jane Jacobs aficionado who leads our local Jane’s Walk, called “The Death and Life of the Upper Midway.” If you haven’t been on this guided historical walk along the Danforth, be sure to sign up for one of this year’s walks on May 2 and May 3 at 10 am. You’ll soon see why. 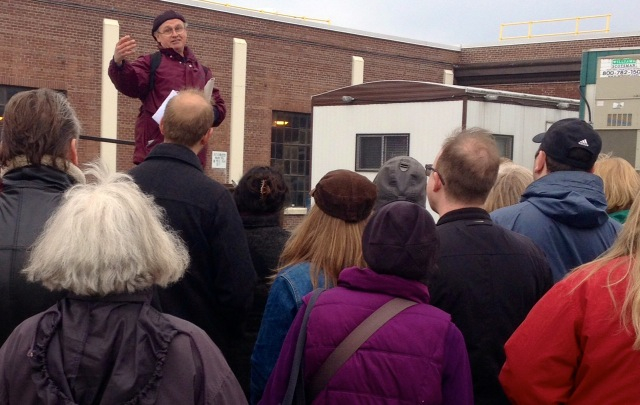 Here is Steve, in his own words….

One thing people don’t know about me is … I’ve been fascinated by the Danforth for more 50 years. Unlike the sleepy Beach area, where I was raised, the Danforth seemed like an exotic real-world place, often in the news, and with a subway under construction. John’s Hobbies (yep, the same one) was exciting for a small boy and Stan Lane Sports (on the south side at Cedarvale) was the first place I knew of where you could buy a curved hockey stick. When I saw My Fair Lady at the once-grand Prince of Wales, (now known as Valu-mart), I remembered the theatre more than the movie. No wonder I like hanging out at the archives and leading an annual Jane’s Walk.

I moved to Danforth East because …  In late 2001, my wife and I decided we wanted a house walking distance to a subway station that wouldn’t require an onerous mortgage. At first we weren’t sure how long we’d stay; now we know the East Danforth is where we want to be, even if we downsize for retirement.

One change I’ve seen over the years …  There’s energy and optimism now. Twice in the early 2000s I attended meetings aimed at getting a community association going. Both groups failed. Somehow, I missed out on the start of DECA, but it seems that the people who founded it also kickstarted a momentum that’s still building.

The thing I love most about the East Danforth is … I have great neighbours and it’s already a walkable, unpretentious commercial strip on the rise after a half century of decline.

My biggest local pet peeve is… Litter pigs: Whether it’s fast-food detritus or cigarette butts, it tells me too many people don’t care. Let’s make this a part of town where you’re more likely to get odd looks from people for dropping litter, rather than for picking it up.

My neighbourhood secret is… We have a largely overlooked history as a rural zone within the city until the 1920s, then with a diverse local economy when it was a blue-collar industrial area into the 1950s. The Canada Bread plant east of Greenwood bestowed a wonderful aroma, and it’s employees packed the Linsmore on shift changes. Shoppers World was once Ford’s main assembly plant and the eastbound streetcars were packed in the morning as people arrived for jobs in our area. There were brickyards, quarries, small factories, coal and lumber yards and car dealerships. The John Wood plant on the south side of Hanson was Canada’s biggest producer of hot water tanks. When we had lots of jobs, lots of people were on the sidewalks at different times of the day, and the shops and restaurants thrived.

A place you might not have visited on the Danforth is … Len Duckworth’s (just east of Main and the DECA boundary) may be the oldest fish and chips shop in the city. It has thrived since 1930s, in part because halibut in their crisp, decadent batter is unbeatable. The gritty old Linsmore Tavern (1298 Danforth Ave) has new life and brings in great bands on Friday and Saturday nights (some such as the Neil Young’uns are so popular they sell out a week in advance). If you like my haircut (and, really, who doesn’t?), it’s “the poeta,” courtesy of No. 1 Sam (Sam’s Hair Styling, 1696 Danforth Ave).

My dream plan for the next year as a DECA board member is…. Working with our visioning committee to ensure the neighbourhood is well represented when the city launches its Danforth Planning Studies.  We need to make the place more pedestrian friendly, in part by ensuring that when density comes, it includes office jobs to replace some of the industry we lost after World War II. We need to ensure that when sites such as the Coxwell TTC lands and the parking lot behind Valu-mart are redeveloped (and they will be) that they add to the livability of the area.