It’s that time of year again: when the nights get a bit cooler, school starts again, and we prepare for all things fall. Here at DECA, when we reflect on all that we accomplished over the summer months with the help of our fabulous #DanforthEast community (Farmers’ Market, 880 Streets event, Arts Fair prep), one thing that stands out is the awarding of our Young Leaders Scholarship to local resident Rayne Fisher-Quann. 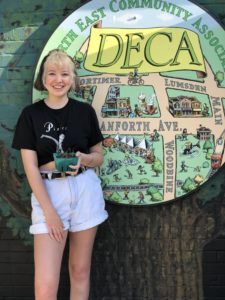 We want to tell you all about Rayne (because she is all kinds of awesome!), but first, a brief bit of background on both the scholarship and DECA in general. When DECA formed in 2007, our express goal was to build, rather than fight against, something. Over the past 12 years, we’ve gathered around kitchen tables and in local businesses to advocate for and work towards #DanforthEast being a more vibrant, safe, and inclusive space for all its residents. An ambitious goal, to be sure, and with much still to be done — but we are proud of the efforts of our all-volunteer board and all the community members that have contributed.

The Young Leaders Scholarship was born out of our core desire to build. Building for our #DanforthEast community of the future means enabling community-minded and socially conscious young people to pursue their educational goals, and allowing their experiences to help shape community, social, and governmental initiatives. Our scholarship awards $2,000 to a high school student entering post-secondary studies or training who is involved in supporting and/or improving their communities. To be eligible for application, a young person must be entering their first year of post-secondary education or training in fall of the application year; live or go to school within DECA boundaries (Main Street east, Lumsden/Mortimer north, Monarch Park west, and the train tracks to the south); and be actively working to improve their school and/or neighbourhood in some demonstrable way. The proceeds of the scholarship is the result of funds raised by DECA through our assorted community events, principally our annual Retro Dance Party.

Now to introduce 2019’s winner. Rayne Fisher-Quann graduated this June from William Lyon Mackenzie Collegiate Institute in the MACS program for advanced math, science, and computer science, and is heading to the University of British Columbia for a planned major in physics and a planned minor in political science or international relations. In the years leading up to her graduation, Rayne worked as a prominent education and gender equality activist in our community, across Canada, and beyond. Most recently, Rayne helped lead March for Our Education and StudentsSayNo — student advocacy groups that were formed in response to recent changes to the Ontario educational system — as they organized 200,000 students in a mass walkout, the single largest student protest in Canadian history. Rayne was invited to speak at various universities and conferences, and was also approached by the United Nations, who asked her to join a team of a select few activists from around the world to lead the Girls’ Education Initiative, for which she co-wrote a global call to action and contributed a video lecture.

Rayne also serves as Vice President of Define! youth, a registered non-profit with the goal of allowing young people of all social, economic, and cultural backgrounds to achieve the same footing in the professional world, and to create spaces where everyone can have an equal opportunity. To date, Define! youth has held three conferences that offered workshops on scholarship application, youth activism, networking, resume-building, and more. For her work in these and many other capacities, Rayne was named Toronto’s LGBT Youth of theYear at the INSPIRE Awards, a Woman of the Year by Chatelaine Magazine, and one of Canada’s Most Powerful Women of 2018 by Refinery29.

To say we are inspired by this amazing young person is an understatement, and it has been a great privilege to help her pursue her educational dreams!!

If you are interested in volunteering with DECA for this initiative and/or have ideas about how we can make our #DanforthEast neighbourhood an even more amazing place, get in touch with us by email at info@deca.to.