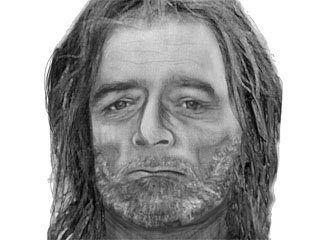 Toronto Police released a composite sketch of a suspect in an attempted child abduction last week -Friday, June 27 at 9 a.m.

It is reported that:
– a three-year-old girl was walking with her mother and younger brother who was in a stroller
– they were walking along the walkway just south of the railway tracks from Coxwell Ave. to Woodfield Rd.
– a man, who was hiding in the bushes, reached through a gap in the fence and grabbed the young girl
– the suspect attempted to pull the girl through the fence
-the mother grabbed her daughter and tried to pull her away and in doing so kicked the suspect in the arm forcing him to drop the girl
– he was last seen on the railway tracks between Coxwell and Woodfield Rd.
The suspect is described as white, 5’8″ – 5’9″, 175 lbs, salt and peppper, shoulder length hair and similarly coloured scruffy facial hari.  He has a lazy or drooped left eye and was very dirty.  He was wearing a navy blue or black shirt that was ripped near the right shoulder.  He had a tattoo on his right outer forearm, between the wrist and elbow.  The tattoo is black with an eagle with one wing extended and the other folded.  The eagle is possibly standing on something or there are words written beneath it.
Members of the public should be careful walking with their children in the area.  Anyone with information is asked to contact police at 416-808-5500, Crime Stoppers anonymously at 41-222-TIPS (8477) or www.222tips.com.
55 division, toronto police, woodfield