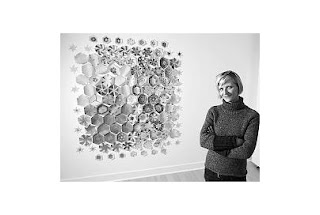 Is Danforth East the new Parkdale?

The stretch of Danforth between Greenwood and Coxwell can be sparse for the culturati — unless they’re taking a break for basement beers at the Danforth Bowl, that is. But that will change a bit tomorrow, with the opening of List, the strip’s first contemporary art gallery.

Sandwiched between an Ethiopian convenience store and a defunct Bulgarian social club, List Gallery’s now-sunny storefront at 1385 Danforth Ave. used to offer the street-scape little more than closed blinds. But beyond those blinds lay a working artists’ studio. In fact, the rest of the unit past the gallery’s rear wall still serves as shared studio space for artists Janine Miedzick, Jay Wilson, Kelvin Britton and Svava Juliusson, the Monarch Park resident who opened the gallery.

“We’ve been renting this unit as studio space for a couple of years,” says Juliusson, an East Coast transplant who met her studio mates while doing an MFA a York University in 2006. “It’s a really reasonable deal for Toronto, and several of us already lived in the area.” When one artist decided to move out post-new baby, Juliusson took on a second share of the rent to create List.

Though smallish at 220 square feet, List is clean, bright and well organized. Its main exhibition space is open Wednesday, Thursday, Friday and Sunday from 12 to 5 p. m.; an adjoining vitrine showcases a 24/7 piece of public art.

For the gallery’s opening, Tania Ursomarzo’s installation of fluorescent string radiates fascinatingly through the vitrine, refracting off the ceiling and into the studio beyond. In the main gallery, recent Art Institute of Chicago grad Gillian Collyer offers raw sculptures of vacuum cleaners, while Kristiina Lahde, already showing at west end hot spots such as MADE and Katharine Mulherin, crafts a kaleidoscope of newspaper pages.

Amanda Schoppel rounds out List’s initial offerings with sensitive, map-like drawings on time and place. They’re particularly relevant here given the question of whether List was wise to open on this oft-spotty stretch of the Danforth — and during a recession, no less.

“Well, why not?” Juliusson says, smiling. “I’m going into this very low-risk. There are a few galleries on Queen East, and if List can be part of a combined effort to make the east end of town more of a destination for art, then I want to be part of that, too.”

Why not, indeed. With Luc-Sculpture art school and studio just around the corner on Greenwood Avenue and Red Sable, another small studio/gallery east of Coxwell–as well as that long-standing promise of unpretentious beers ‘n’ bowling — the creative draw of this Danforth stretch is definitely worth keeping a well-trained eye on.