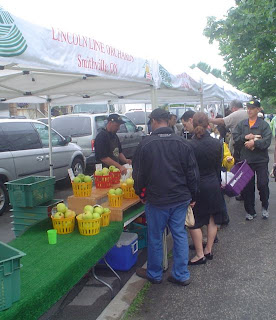 The first ever East Lynn Farmers’ Market was a raging success. If you showed up after 5:30 (like me) you saw that a lot of the goods were sold out! I understand the pies were gone by 3:30 and the farm fresh eggs didn’t last much past 4:30. I saw the last loaf of bread walk out at 6. No worries though, those farmers have assured us that next week they’ll be back with a lot more to sell. They were dee-lighted with the turnout. And, well, so were we.

Apparently the after-school crowd was a sight to behold as a sea of kids played in the park and on the grass. I was so excited I almost left without my tomatoes.

Too bad about the rain. I had planned on buying a chicken sandwich from Quattro Regazze and having a picnic on the grass, but the rain put a damper on that little plan so instead I had an absolutely delicious meal with some friends that I ran into at the market at Melanie’s Bistro. I had the butter chicken – yum.

Thanks to everyone for coming and we’ll see you there next week. Hopefully the sun will shine and we can do a little more chatting, singing and dancing.

And – mark your calendars for June 19th – the official opening of the farmers’ market and Neighbours Night Out.