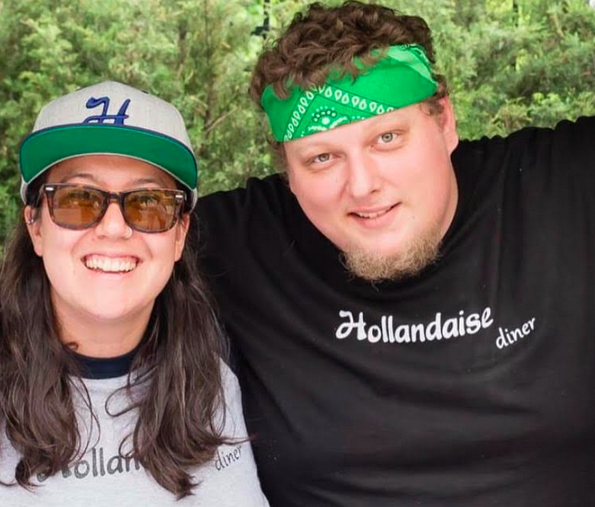 Meet Marisa and Josh, co-owners of the Hollandaise Diner

By the time regulars are sliding into their seats, Josh already has their order started on the flat top; he knows what they like. There’s Betty who likes ham sandwiches.  The Grilled Cheese Ladies are regulars and there’s the couple who max out every button on the iPad when they customize their eggs benny.  With offers from customers to help with heavy plates and friendly hellos to Josh while he’s cooking in the kitchen, The Hollandaise Diner has become what they hoped it would be – a homey place that’s a nice breakfast option for the neighbourhood.

Being family friendly was their biggest thing.  The stack of highchairs by the front door attests to this and so does their menu.  Josh and Marisa had their nieces and nephews test the food before putting it on the menu.  What is Owen going to eat when he comes here?  The answer is usually pancakes.

Kids love Josh’s pancakes.  One of their servers, Sandra, is often called The Pancake Lady by little ones who pass her on the street.  With three different choices of batter (chocolate, coconut, and classic) and five different sauces (blueberry, banana, strawberry, raspberry, or chocolate), I can see why she’s a neighbourhood celebrity.

At the Hollandaise Diner, adults can feel like kids too.  With a Build Your Own Benny option, you can let your imagination run wild.  Meatloaf? Grilled cheese for a base? Maybe a few or all of the 12 toppings available.  You can build it up with as many things as you want.  There’s coconut hollandaise sauce (Josh’s favourite) or four others to top your creation.  For Josh and Marisa, they have lots of fun seeing what people come up with.  There have been benny’s so high off the plate that they’ve been afraid to carry them to the table for fear they’d topple over.  Photos were taken because it was ridiculous (in a good way)… 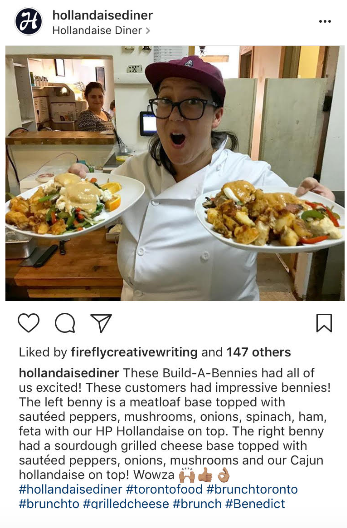 Many of their main ingredients come from east end businesses.  Their smoked salmon is from The Smoke Bloke at Victoria Park and St. Clair.  After one taste, Josh knew he had to figure out a way to incorporate it into the menu, hence The Smoke Bloke benny.

Marisa and Josh wanted to buy bread locally.  After a sample of Celena’s sourdough, the decision was made.  Oh my god, this is the best bread I’ve ever had in my life (Josh). With their menu about to be printed in two hours, Josh rushed back to the diner to hopefully come up with one more item to add.  Two hours later, he had their best selling benedict on the menu – The Croque Madame.  A grilled cheese sandwich cut in half (made with Celena’s sourdough bread), with fried ham, two poached eggs, hollandaise sauce, and fresh parsley.  It’s the benny that everyone talks about.

So why a diner?  How did it all begin?  Their friend Dave suggested it.  Josh and Dave have been friends since grade 5 and grew up in the neighbourhood (Josh lived across the street from Toronto East General Hospital).  I didn’t think he was fully serious.  I never thought in a million years that I would have my own diner (Josh).

Josh was a sous chef who worked at Fran’s downtown.  Working most weekends, Dave and Marisa would have weekend brunch dates.  They had favourite places they’d frequent and were finding brunch to be an expensive outing for families.  The three started talking about a diner that would provide delicious food for a reasonable price. Maybe they would call it The Hungry Diner or Hollandaise.  Hollandaise Diner was decided upon to capture the laid back, family feel of a diner.  The pieces started coming together and soon the three started to think, yeah, we can do this. Together, Dave, Josh, and Marisa opened Hollandaise Diner, and Dave has since moved on to open up another business.

I remember counting the seats and thinking, we’ll have to get this many people, ordering this many times, spending this much money…I was freaking out.  And then the first week, I was having the opposite problem.  I was here for 16 hours because I couldn’t keep up.  I would spend all day cooking and then have 8 hours of prep ahead of me. It was just amazing the turnout we had.  (Josh)

With more breakfast places appearing along the Danforth, Marisa and Josh are happy to see multiple options that will keep brunch-goers staying local.  Fellow business owners and residents have made them feel so welcome and supported. People stop by just to say hi, to have a meal, or to offer a helping hand.

This has always been home to me.  The fact that I can be here and have so much support from the community, it means the world to me.  It’s unreal.  (Josh)

The Hollandaise Diner is open 7 a.m. – 3 p.m. daily and is located at 2231 Danforth Ave (across the street from the Honda dealership).  You can see their amazing food on Instagram or check out their menu online.  For this weekend only, add chocolate and SKOR bits to your pancakes or French Toast! (Nov. 3rd – 5th, 2017)

Additional posts from The Humans of Danforth East series:

Kari from The Pop Stand

Colleen from The Nooks

Introducing the Humans of Danforth East