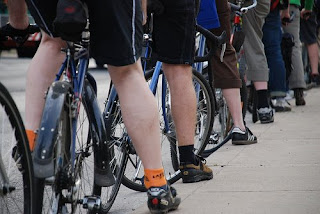 I spent my subway commute yesterday listening to the great Spacing Radio podcast, hosted by CBC Radio’s David Michael Lamb. (If you’re interested in Toronto’s urban space, and I’m pretty sure you are, you might be interested in this podcast or the magazine.) Anyway, it was (almost) all about biking. I’ll admit that, while I biked A LOT (on roads, pathways and
mountains) when I lived in Calgary, I’ve never felt particularly safe on Toronto streets. Also, there’s a perspiration issue which I will not get into.

In any case, while I’m listening to this biking podcast, I get an e-mail from Joe. Joe and his wife moved in to a place at Danforth and Woodbine just before Christmas. And Joe is seriously into biking in Toronto. He runs a website about it called BikingToronto.com.
Joe tells me the City of Toronto’s Bike Month is coming up May 25-June 25 and there is a Group Commute and pancake breakfast on Monday, May 25th. A group is starting at Woodbine and Danforth at 7 am on the 25th. You’ll head west along Danforth where you’ll meet up with other groups at Yonge and Bloor and bike down with thousands (thousands?!) of cyclists to Nathan Phillips Square for free breakfast and other goodies. I must admit that does sound fun and if I wasn’t a giant pregnant lady, I just might do it.
If you’re interested in the group commute visit bikingtoronto.com or contact joe@bikingtoronto.com
And thanks Joe for passing it along.
See more photos here.
Uncategorized