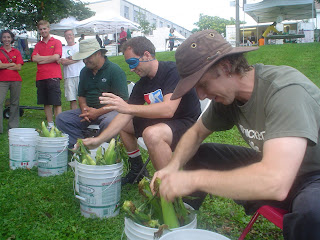 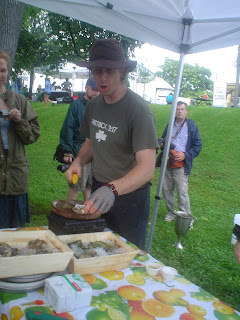 The rain poured down.  And then, as if by divine intervention, the clouds broke and a single ray of sunshine fell right on to the DECA tent where Shuckfest was about to begin.

First there was the corn, tomato salsa demo.
Then there were the oysters.
Then it was time for the hard-nosed competitors to take their place at the buckets.  Patrick McMurray, champion oyster shucker took on Kevin Brauch, champion drinker and host of the Food Network’s, The Thirsty Traveler and farmer Boz (he’s cool enough to just go by ‘Boz’) one of our farmers’ market farmers.
It wasn’t really a close competition.  The calm, cool and collected Boz schooled both East Toronto boys in corn cob shucking.  It really was a lot of fun and even though none of my so-called friends saved a cob of corn for me, the boiled results of the corn shucking looked pretty yummy too.
farmers market